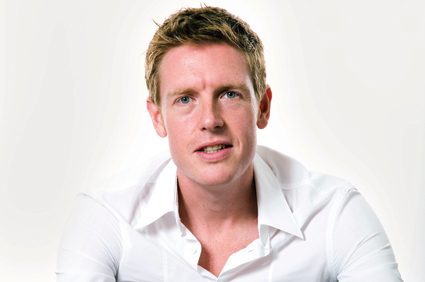 Rob Holdway is co-founder and Director of environmental management consultants Giraffe, working with companies on carbon management and footprinting, sustainable design, innovation management and EU environmental legislation. Rob was described by ‘The Manufacturer’ magazine as ‘Britain’s leading eco-design consultant’. Giraffe was listed by The Guardian as one of the 10 brightest independent UK green businesses http://business.guardian.co.uk/windofchange/story/0,,2217319,00.html.

Rob was presenter and on-screen expert for Channel 4’s DUMPED programme screened last year. Check out Rob’s Channel 4 Blog.Rob is a judge on this years The Observer  Ethical Awards and is one of London’s Sustainable Development Commission’s London Leaders for 2009 http://www.londonsdc.org/londonleaders.

Rob is also the face and on-screen expert for At Home Magazine – ‘At Home with Rob Holdway – All you need to know about living in an eco environment’ published October 2008 (EMP plc). Rob has written an article – ‘Design for a One Planet Economy’ for The Innovation Handbook published by Kogan Page in September 2008. Rob is one of 8 advisors on the UK Government Envirowise programme, an advisor on Sustainable Products and Materials Programme for Defra, and he is also an technical advisor on the Government WRAP programme.

Rob has been a fellow of the RSA (Royal Society for the Encouragement of Arts, Manufactures and Commerce) for 15 years and was director of the RSA WEEE Man project. A large sculpture made of electronic waste permanently on display at The Eden Project. He is also Director of the RSA’s ‘Changing Habbits’ project.

Rob has a B.A. (Hons) Industrial Design, M.A. from Brunel University and spent 4 years as a Research Fellow at the Royal College of Art/Imperial College working on the Good Design Practice Programme with the University of Cambridge. Through Giraffe, Rob has worked with over 400 companies on eco-desing, in the EU, China, Hong Kong and US, identifying potential savings of over £75million. Clients include: De La Rue, Virgin Group, PC World, Belkin, RSA, Early Learning Centre, J. Sainsbury Plc, Toyota, Morphy Richards, British Airways, Canon, Dell and L’Oreal.